I was driving home from the Cancer Centre last week … stopped at a red light. I looked over to the right and BAM! I was rear-ended by a truck. Thankfully I was stopped far enough back that I didn’t hit the car in front of me, but I was thrown forward a good five feet. I felt my head whip forward and snap back, but I was OK. So was the other driver.  But my new car was crumpled.

I could crawl into a corner and cry that I’ve had enough.

But instead I was thankful. Thankful that the dogs weren’t with me. Thankful that I wasn’t the parent of the two young children who were killed on an Ontario highway in a car crash the night before. Thankful I wouldn’t have to be hospitalized. I did sustain some mild whiplash with headaches, but nothing was bleeding or broken. I went to chemo with Sherri the next day.

And I figured … God decicded I needed to be off the roads for a reason. I was planning on driving myself to chemo the next day since my ride fell through. Maybe that wasn’t such a good idea.

My reaction was entirely up to me.

This doesn’t mean I find the immediate rose in every thorn … although I almost always eventually do. My inner beauty doesn’t always shine through as a relationship ends. But eyes wide open – years or months later – gives me the answer as to why it had to end.  They were a bad idea that seemed like a good idea at the time.  They were a lesson.  Time + Distance = Clarity.  (How many times do I have to repeat that I am not perfect?).  Sometimes I need that thump on the head, but if it’s delivered with lack of compassion, I usually resent it.  Is it constructive or cruel?  Once I decide someone is being cruel, I try to create some distance.

“The beauty is that through disappointment you can gain clarity, and with clarity comes conviction and true originality.” – Conan O’Brien

No one is given a rose bouquet life every day.

And not every story has a fairytale happy ending.

The one thing I couldn’t tolerate about my Ex was his negativity. His glass was always half empty. If I said it was a beautiful day, he would remind me that the forecast called for rain tomorrow. It drove me nuts. He was constantly and consistently discouraging.

It didn’t help when I learned that his pessimism was rooted in fear. Fear of not being loved. Fear of not being safe. Fear of a world where bad things happen and people aren’t trustworthy. He was thin skinned, judgemental, demanding, risk adverse and controlling. He used guilt and shame as weapons. Imagine my surprise to learn that all these qualities would commonly cluster in pessamistic people.

He could dish out criticism but would go wild if the recipient. I still recall the moment when I accused him of being abusive. He ran from the hallway, his hands over his ears, only to return – SCREAMING – that I was abusive. I abused him by witholding sex. He turned my accusations around and threw them right in my face.

By the way … I didn’t withold sex until our relationship had completely deteriorated and I was no longer comfortable submitting my mind, body and soul to a man who hurt me.

You’ve read my blog. You know I love sex.

If guests who didn’t offer the proper level of thanks to Charles*, they were not to be invited back. They were ingrates who didn’t deserve future invites. He called my son’s baseball coaches “lunch-buckets” yet never volunteered to do the job.

He was demanding of me but wouldn’t lift a finger to do what he asked.

Charles wanted control of everything. What our son ate. When he rode a bike. What was on TV. When we went grocery shopping. What was on the table.

It all comes down to blame. Blame someone else for your failures. Blame the sky for ruining your picnic. Blame luck for your lack of it.

No one likes to be around those negative Nellies for long. They drag you down. As much as I tried to give him the love and respect he desperately wanted, he took more and more but gave less and less. The glass finally cracked.

I had to crawl and claw my way out of that dark place. And what helped the most was my inner belief that life would get better.

I blamed myself … but learned that I wasn’t to blame.

I knew that not all men were bad and I was full of hope that I would find the right person. I still am.

I didn’t let this negative experience permanently take over my life. I didn’t stick – like a broken record – and replay the same scenario over and over in my head.

In fact, I did the opposite! I thanked him!

I learned what I was made of by crawling and climbing through adversity. I don’t think I had the depth of character to deal with cancer in my twenties or thirties. I would have felt victimized. I learned endurance and resilience in my forties to prepare for the fight for my life in my fifties (51 to be exact).

You can’t bypass the bad stuff. You have to lean into it. Go through it and come out the other side. You will know you aren’t moving when nothing changes.

“I teach suffering, its origin, cessation and path.” said the Buddha.

These are the Four Noble Truths which contain the essence of the Buddha’s teachings. It was these four principles that the Buddha came to understand during his meditation under the bodhi tree.

The Buddha is often compared to a doctor. In the first two Noble Truths, the doctor diagnosed the problem (suffering) and identified its cause. The third Noble Truth shows that there is a cure. The fourth Noble Truth, in which the Buddha set out the Eightfold Path, is the prescription, the way to achieve relieve suffering.

Imagine the hell of being stuck in Dukkha … stuck in pain.

Whatever can begin, can end. Including Grief. Pain. Life. Happiness. Illness.  Friendship.

To the buddhist mind, the glass is both full and empty. Full can be bad and empty can be good. It’s up to you.

Tao says that the point of the emptiness is to fill it. These are our blank pages of tomorrow.

I view my cancer this way. While there are days when I hate the gift, there are more days when I am grateful.  There will always be moments where it will feel more like a curse than a gift, but isn’t that normal?  To spend all my days in one state or another … is that not a sentence or oblivion?

I could continue to cry over my long gone hair … forgetting to draw my eyebrows on and finding one fake lash had fallen off.  Or I can laugh and feel blessed to know Heather, Sophie, Roxie, Storm, Coco, Red.  What a story! 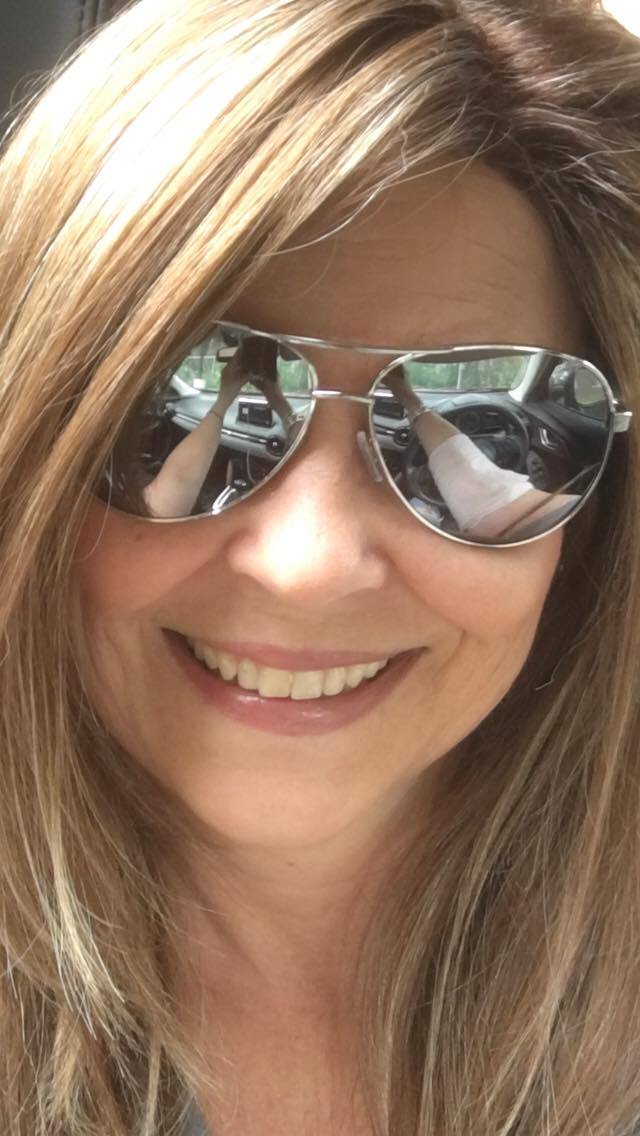 I absolutely cherish the thought that long after I ring the chemo bell, the nurses will say “Do you remember that patient who wore a different wig every time and strolled in here in stilettos and fishnet stockings?  Now she took cancer by the horns … “

Don’t we all want to be remembered?

I am more alive than I was seven months ago.
I am more acutely aware of who and what is important.
I can look in the mirror and know who I am.
I am thankful for the journey. I truly am.
I am grateful because it was a wake-up call.
I have more empathy for everyone’s journey.
I know there isn’t an endless supply of tomorrows.
I’ve found out who my true friends are … and made some new ones.

The reason that the glass is only half full … is because you may want to change the contents. Drink from a different well.  Switch from white wine to red.  Fill up your life with a new direction, new purpose or new love.

I faced each new phase with uncertainty and fear … and learned that I could handle what was coming.  I hope I can handle what is coming.  What if my cancer isn’t gone?

But I won’t dwell on that glass half empty thought.  For to do so would kill my spirit before my body.  To quote the provocative Jewish prayer of Hannah, “Let me not die while I am still alive”.

Still, as I plan a post-cancer party with my friends to ring the bell and be declared cancer free and thank them for their support… I am hesitant to jinx my future.  What if I plan it and I find a new lump the day before?

Then … I guess I will celebrate moving another mountain with those who are near and dear to me. 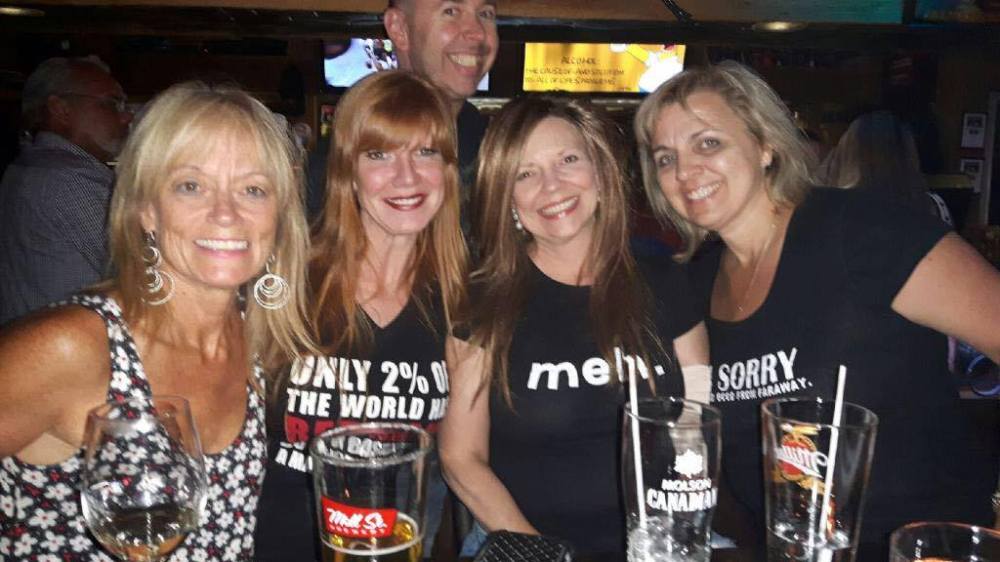 These are people I like.  They have seen me at my worst and loved me best.  There are so many to name … Sue … Fran … Matthew … Sherri … Sherry … Terri … Bettina … Val … Michèle … Renee … Joey … Christyne … Andrew.  Too numerous to list … and don’t feel offended if my chemo brain forgot.  I looked at my recent texts for that list! Ha!

Refilling my happiness one day at a time,

*Name(s) changed to protect the guilty.