Lots of new readers – and I needed to remind myself that I used to look ok – so I decided to share how the fox became part of my persona.  Welcome!  Some of you I haven’t chatted with in years, and it is truly lovely to reconnect.

I travel in a wide and varied social circle born out of a meetup group.  Newly single in 2010, I looked for things to do and learned about Meetup which was a perfect outlet for my extrovert self. Meetup, if you haven’t heard, is a worldwide online phenomenon where groups and people can connect.  The story I have heard is that Meetup was born out of 911.  People got out of their homes and connected with their neighbours, possibly for the first time.  Someone said, “Hey, we should meet up again” and two industrious souls built the website.  It’s fantastic and life changing!  Think of any group you could join – running, new moms, social, dancing, photography, art buffs – ANYTHING!  And you can find it on meetup.

When I travel on business, I usually seek out a local meetup group to dine or hike with. It’s a refreshingly fun way to see other cities.  I’ve met some great people … and never once had issues.  Despite the high school drama vibe.

I learned to bellydance with a group of amazing ladies with this group, most of whom have gone on to become my dearest and closest friends.

The core of the groups became became a large, lovely family of friends.  Richard opens his home to us several times a year for the most epic parties ever.  So epic, that one Sunday I was standing in line at the LCBO – our booze store – and the men in front of be began talking about a party down by the lake last night.  It could be heard for miles.  One gentleman quipped “Those folks sure know how to party!”  I hid my smile in my shoulder and tried not to laugh … Oh yes we do!

The absolute best events are his Hallowe’en Parties … Richard posts them on the meetup groups, caps the attendance at about 150 people and it fills up in minutes.  We literally sit at our key boards and retap the enter key to constantly refresh the site until the event is posted so we can RSVP.

There is always a theme to the parties.

For 2014, the theme was Disney.  Hmmm.  I am not a princess.  I reached out to my American 2Peas buddies on facebook and asked for ideas.  Kris sent me a link to a costume site and BOOM!  There it was.  I would go as the Fox from Disney’s Fox and the Hound.  I ordered the fox costume and the furry legwarmers – worn over my go go boots.  Long silk white gloves and loads of bling.

Never did live this one down!  Won the cleavage award.  And the fox stuck.  I’ve got all these foxy gifts from friends & family … fox jewelry, fox mugs, fox figures, fox Christmas decorations, fox wear, fox art.  I am sure foxes are one of my spirit animals.  My POF profile even pays homage to the fox (just doesn’t show the whole thang…). 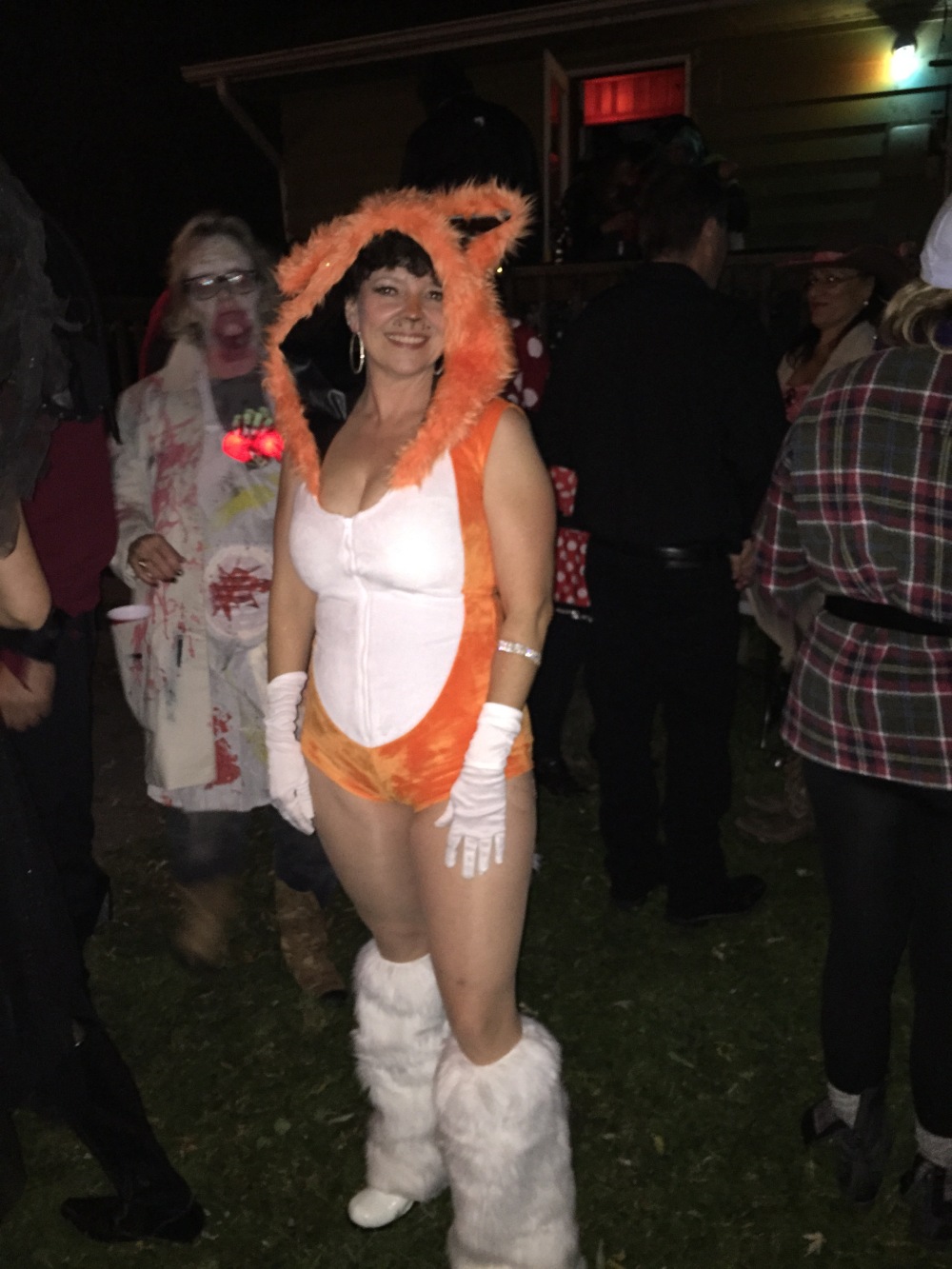 In 2011 I went out as a fortune telling gypsy, complete with a crystal ball.

In 2012 I went out as a 60s chick complete with psychadelic dress and white go go boots.  This costume is the one I will wear – with a cute pink wig – to ring the bell when I complete my chemotherapy.

In 2013 the theme was superheroes – and I was really getting into the swing of things with this group so my (ex-boyfriend) and I went as Batman and Catwoman.  This one was almost as hard to live down as the fox … and the one to beat. 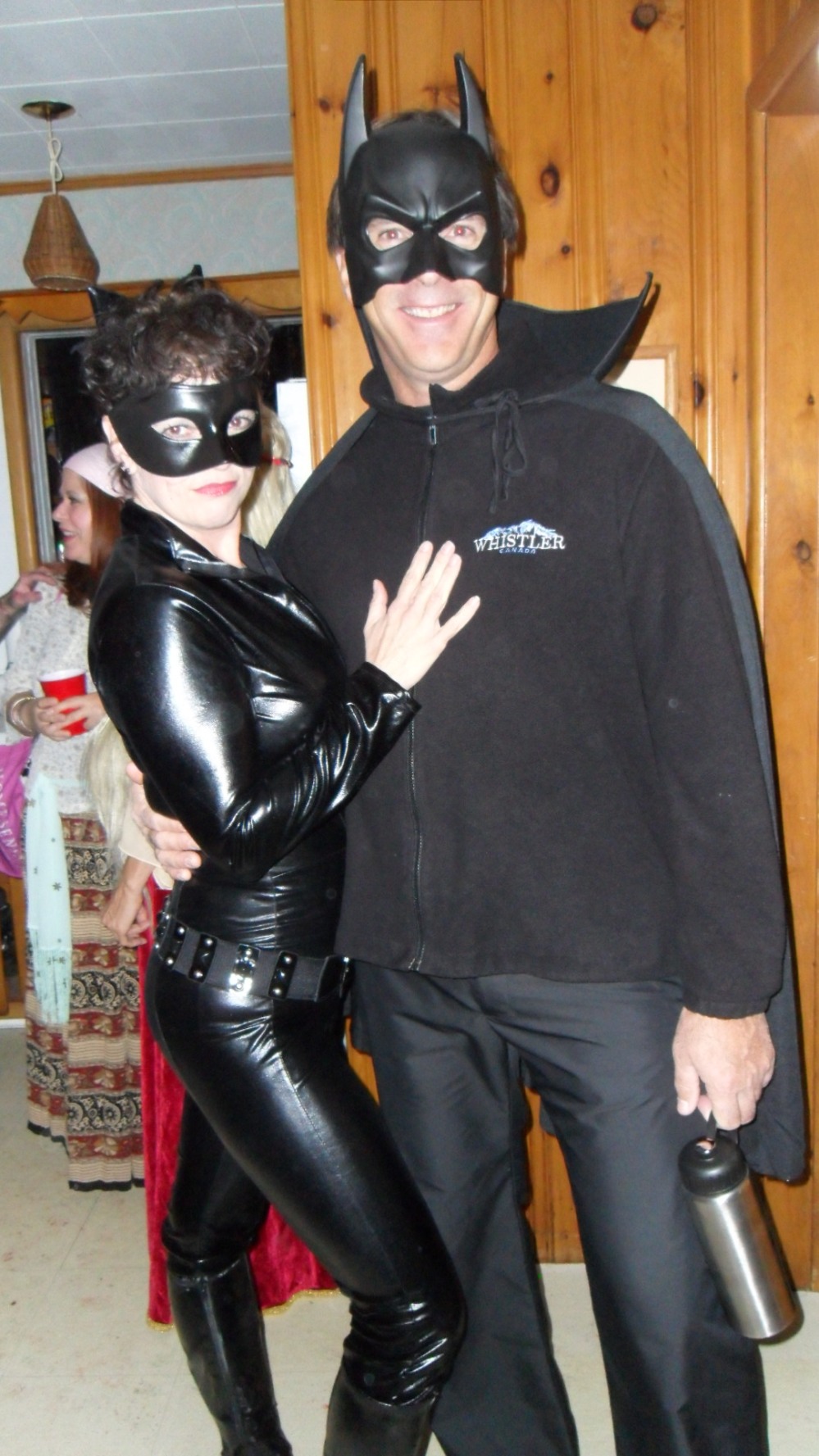 In 2015 I was the big bad wolf to my (ex-boyfriend) Little Red Riding Hood.  He humoured me an wore the dress … and wore it well.

In 2016 Sue and I went as Black + White cats, complete with a beautiful black and white feather boas for tails.  Yes, that is a real dog collar and tags on my neck.  You should have seen the stares as I tried collars on at Pet Smart!  The hoodie has cat ears and and tassels to play with.  Meow.

I needed some smiles & giggles today so thanks for joining me in my trip down memory lane.

Live like there is no tomorrow!  Trick or treat!

Read the Fox blog:  Hear what the Fox really has to say